Gaslighting is a form of psychological abuse where a person or group makes someone question their sanity, perception of reality, or memories. People experiencing gaslighting often feel confused, anxious, and unable to trust themselves. The term gaslighting derives from the 1938 play and 1944 film “Gaslight”, in which a husband manipulates his wife into thinking she has a mental illness by dimming their gas-fueled lights and telling her she is hallucinating. While anyone can experience gaslighting, it is especially common in intimate relationships and in social interactions where there is an imbalance of power. A person who is on the receiving end of this behavior is experiencing abuse.

Art which is based on images of mass consumer culture. Pop art was initially regarded as a reaction from abstract expressionism because its exponents brought back figural imagery and made use of impersonal handling. It was seen as a descendant of Dada because it debunked the seriousness of the art world and embraced the use or reproduction of commonplace subjects. Comic books, advertisements, packaging, and images from television and the cinema were all part of the iconography of the movement.

When will the Amazon hit a tipping point? 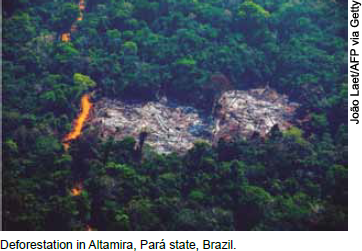 Scientists say climate change, deforestation and fires could cause the world’s largest rainforest to dry out. The big question is how soon that might happen. Seen from a monitoring tower above the treetops near Manaus, in the Brazilian Amazon, the rainforest canopy stretches to the horizon as an endless sea of green. It looks like a rich and healthy ecosystem, but appearances are deceiving. This rainforest — which holds 16,000 separate tree species — is slowly drying out.
Over the past century, the average temperature in the forest has risen by 1-1.5 °C. In some parts, the dry season has expanded during the past 50 years, from four months to almost five. Severe droughts have hit three times since 2005. That’s all driving a shift in vegetation. In 2018, a study reported that trees that do best in moist conditions, such as tropical legumes from the genus Inga, are dying. Those adapted to drier climes, such as the Brazil nut tree (Bertholletia excelsa), are thriving.
At the same time, large parts of the Amazon, the world’s largest rainforest, are being cut down and burnt. Tree clearing has already shrunk the forest by around 15% from its 1970s extent of more than 6 million square kilometres; in Brazil, which contains more than half the forest, more than 19% has disappeared. Last year, deforestation in Brazil spiked by around 30% to almost 10,000 km2, the largest loss in a decade. And in August 2019, videos of wildfires in the Amazon made international headlines. The number of fires that month was the highest for any August since an extreme drought in 2010.

WHAT DIFFERENCE DOES A WARMING OF 1.5 °C MAKE ANYWAY? 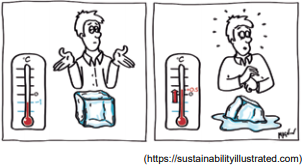 The soft hum of the Toyota Prius is to the streets of Ulaanbaatar what the screech [chiado, guincho] of brakes and honk of horns is to New York: omnipresent. Beloved of eco-warriors worldwide, the Japanese car dominates the streets of Mongolia’s capital. If you stand on the corner of Sukhbaatar Square in the city center, a good half of the passenger vehicles you see sailing past are Priuses. Dozens of garages [oficinas] work only with them. According to UN trade data and The Economist’s estimates, some 60% of Mongolia’s car imports last year [2017] were hybrids.

They are popular in Mongolia, as elsewhere, because hybrid engines are efficient and fuel costs low. The cars themselves are also cheap: according to the UB Post, a local newspaper, you can purchase a used Prius for as little as $2,000. That is partly because most Mongolian ones are second-hand imports from Japan, where passenger vehicles more than three years old must undergo expensive safety tests. Rather than pay for those, many Japanese drivers buy a new car. (That is the point of the tests, some say: to boost [apoiar, fortelecer] domestic car manufacturers.) In 2017, Japan exported 30,000 hybrid vehicles to Mongolia.

In addition, the government has exempted hybrids from various taxes, in an attempt to clear the air in Ulaanbaatar. The city is one of the most polluted in the world in winter because of the widespread [generalizado] use of coal for heating and power generation. Hybrid vehicles enter the country duty-free and, unlike most cars, are exempt from an air-pollution tax.

But the clincher [fator decisivo] is the Prius’s reliability. Ulaanbaatar may be the chilliest capital in the world. On a winter morning drivers must sometimes start their cars in temperatures below –30 degrees Celsius. Cars that run on gasoline and diesel tend to sputter [falhar] and die at such temperatures. The Prius can use its battery to power its electrical engine until the car warms up enough for the gasoline engine to run smoothly – saving many a Mongolian from freezing frustration.

According to the information in the article,

Back in lhe ancestral homeland of Michelle Obama, black women were rarety granted the honorific Miss or Mrs., but were addressed by their first name, or simply as “gal” or “auntie” or worse. This so openly demeaned them that many black women, long after they had left the South, refused to answer if called by their first name. A mother and father in 1970s Texas named their newborm “Miss” so that white people would have no choice but to address their daughter by that title. Black women were meant for the field or the kitchen, or for use as they saw fit. They were, by definition, not ladies. The very idea of a black woman as first lady of the land, well, that would have been unlhinkable.

Consumption is in the very nature of living. To live is to consume. But it becomes excessive when it extends beyond what is needed. Our Earth produces enough resources to meet all of our needs, but it does not produce enough resources to meet all of our wants. And whether you consider yourself an environmentalist or not, it is difficult to argue with the fact that consuming more resources than the earth can replace is not a healthy trend, especially when it is completely unnecessary.