Edward Enninful, the new editor-in-chief of British Vogue, has a proven history of addressing diversity that many hope will be the start of an overhaul of the global Vogue brand.

In March, he responded sublimely when US President Donald Trump nominated Supreme Court judge Neil Gorsuch, who allegedly does not care much about civil rights: Enninful styled a shoot for his then employer, the New York-based W magazine, in which a range of ethnically diverse models climb the stairs of an imaginary "Supreme Court". In February, after Trump initiated the much-debated immigration ban, Enninful put together a video showcasing the various fashion celebrities who have immigrated into the US. Even before his first official day in Vogue’s Mayfair offices, Enninful had hired two English superstars of Jamaican descent in an attempt to diversify the team. Model Naomi Campbell and make-up artist Pat McGrath both share Enninful’s aim of championing fashion as a force for social change.

One can only hope that Enninful’s appointment is not a mere blip, but a move in the right direction on a long road to diversity for the global brand.

Women in Theatre: Why Do So Few Make It to the Top?

An all-female Julius Caesar (A Shakespeare play) has just hit the stage, but it's a rarity in theatre. In a special report, Charlotte Higgins asks leading figures why women are still underrepresented at every level of the business — and what needs to change.

If You’re Out There

If you hear this message

We can’t afford to wait

We’ve been looking for a song to sing

Searched for a melody

Searched for someone to lead

We’ve been looking for the world to change

If you feel the same, we’ll go on and say

If you’re out there

Sing along with me if you’re out there

I’m dying to believe that you’re out there

Stand up and say it loud if you’re out there

We can destroy Hunger

We can conquer Hate

Put down the arms and raise your voice

The Yearly International Buy Nothing Day 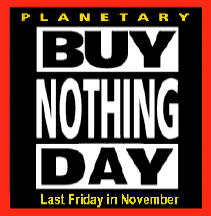 The end of November many countries worldwide experience the International Buy Nothing Day/No Shop Day. Buy Nothing Day is especially a day of protest by all of those who find that they have enough, and want to voice their opposition to the incessant trend towards 'always more.' Buy Nothing Day is particularly celebrated in countries that have a very high level of consumption.
The initiative for the Buy Nothing Day was taken in 1992, in Canada, by Ted Dave, who was working in the advertising world. By doing this, he wanted to perform an act against the constant appeal to overconsume, which advertisements pour out on us. His motto was: Enough is enough! Since then the idea of the Buy Nothing Day has been adopted by increasingly more countries. This year there will be activities in at least thirteen countries.

Participate by not participating!

The easiest way to become involved in the Buy Nothing Day is: Stay at home! Give yourself and your wallet a day of rest by not shopping. Some countries have special posters to put in your windows. Those who want to participate in this campaign in a more active way - and that is definitely much more fun - can contact the coordinating group in their own country.
Omslag, Workshop for Sustainable Development - The Netherlands

Women writers are all over the best-seller lists, but literary criticism is still predominantly a male field.

That’s according to the latest numbers from the volunteer organization VIDA: Women in the Literary Arts, which works for gender and racial parity in the literary world. This year’s report covers prestigious publications like The New York Review of Books, which published 227 male reviewers last year but only 54 female reviewers, and The London Review of Books, which published 146 male critics and 44 women during the same period. The Paris Review “made great strides toward gender parity” in 2013, the report notes, but then slid and published substantially fewer women than men in 2014.
As The Guardian points out, those figures are especially striking when you consider that women are more avid readers than men in the U.K., where some of the biggest offenders are based.
The figures are not all disheartening. Major magazines like The New Yorker, The Atlantic and Harper’s all showed increases in the number of women published in 2014.
That data are valuable (without VIDA, the figures would likely go untallied), and the broader awareness even more so. Top editors likely know gender disparity is an issue, but they’re more likely to pay attention to it when an organization like VIDA is paying attention to them.

Reasons for negative effects of media on teens

Many teens usually spend sleepless nights on social media without the knowledge of their parents.
Insomnia, mood swings, attention deficits at school, and increased obesity are some of the serious
[5] negative effects of social media on teenagers and issues that are arising with kids often addicted to social
networks. With such overwhelming evidence of the negative effects of social media on our children, why
then are many parents not taking more action to protect their children?

There perhaps are three major reasons:

[10]
I) Parents are unaware of the issues involved in the online connections. While kids are plugged in to social
media, only about 40% of parents are involved themselves. Parents may not be aware of their children‘s
"pages" and don‘t fully understand privacy policies, and they don‘t realize what kinds of public posting are
taking place, involving their children.

[15]
II) Parents don‘t want to interfere in their children‘s social lives. Parents want to allow their children to be
as connected as the other kids they associate with, and so they tell themselves that everything is OK.

III) Parents are afraid to take a stand. They don‘t want to push their teens away, and so they allow their
[20] participation in social media to go unchecked rather than make a "big deal" out of it.
The problems this new online society creates are not going away and will continue to grow. Parents must
get off the sidelines and get involved! Be aware of who can see what they post and what is being posted
about them. Talk with them about online safety.